Hey there
I am using this space to think out loud and to fish for more information/ideas/leads from people. Because I’m sure I am not the first person to think about all this - so give me a moment to reinvent the wheel, alright?, and then I want to hear who has already figured this out!

So if we try to learn from what a human body as a complex system does, does that help us understand organizations better to learn what functions are needed in an organization? I’m looking at it through a sociocratic lense but of course it’s universal. In particular, I am curious about this comparison as a trainer and consultant so I want to find a comparison that makes sense so I can use it as a shortcut to explain sociocracy.

That means we come out with things every organization needs:

Let me reiterate that I’m not interested in reinventing the wheel here. I just want to know
(1) where I can read more about these thoughts
(2) whether this makes sense to you? Do you think it’s useful to explain sociocracy with this analogy? 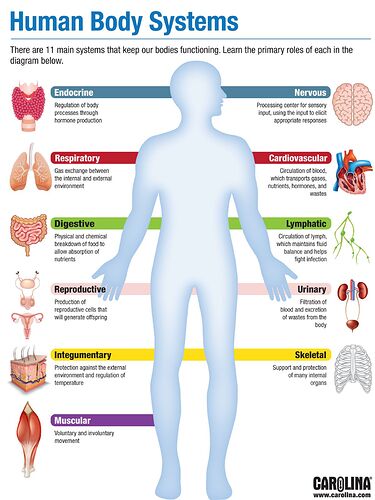 This is one explanation of how the nervous system controls movements that, to me, makes sense when trying to compare the human body and an organization.

TL;DR
The sensory part of the nervous system controls the motor parts. The sensory part creates patterns that the motor parts put into motion. We will follow a pattern of doing that has been established for a long time, and that requires little conscious directing. Sometimes these patterns are so powerful that once they are started you are not able to stop them.

Different parts of the body cooperate to create different movements. In this example to produce, or write, your signature. The signature, made by the human, is a unique manifestation of themself, just as activities performed by the organization is a unique manifestation of itself. You will immediately know who is the “sender”, others can copy it, and it can be similar, but not exactly the same.

How we write our signature is the result of each individual’s process of getting to know and learning to command our musculature. A process that starts at a very young age, and continues as we develop a deeper relationship with our body. This is what we call our motor patterns. To change our motor patterns requires significant changes in our minds relationship to the body as a whole, and that relationship is created by all of our training and experience

When learning to write, most of us start with paper and pen, chalk and a board or a stick and sand. We learn to engage the articular muscles that are needed to create our unique signature in our chosen medium. Regardless of where we start, it seems very possible to later transfer the signature to another medium, but engaging a different set of muscles. From the small movements of the hand with the pen, to the engagement of the hand, arm, shoulder and torso when using the blackboard.

What conclusion does that offer? That the learning is not taking place in the muscle tissue, or the limbs, but somewhere else. The next logical place to search would be in the cortex (cognitive) part of the brain. But when small parts of the motor cortex, that controls the muscles normally used to perform that skill, are removed (paralyed) we will use different muscles instead. So the memory of the skill is not in the command center of the motor skills either. However, if sensory cells, corresponding to the muscle skin, joints etc, are removed from the cortex, we are not only unable to perform the task, but the relearning period takes as long as it did to originally acquire the skill.

So, the sensory parts of the brain have created a pattern, and the motor system follows that pattern. A sensory record of a particular gesture, or series of gestures, once the feeling of it is firmly established as a clear recallable memory, functions as a template, when someone wishes to perform an act first they recall the template associated with past repetitions of the act. You begin by remembering how it felt to do it. The motor system is then set into motion to reproduce the remembered sequence of sensations, as stored in that template. The sensory cortex has memorized the feel of a gesture, and each time it is to repeat that gesture it takes in proprioceptive feedback from all the body parts and compares it with the memory for each step of the intended repetition.

It is not clear where these patterns are stored anatomically, but their existence and control over motor behavior is very clear. Some patterns, such as primitive reflexes are inherited as anatomical structures, and recreated in us as fetuses. While other patterns are created as part of our life experience. These patterns are means of arranging meaningful sequences of primitive reflexes. When these are repeated over and over they take a more stable nature, following increasingly predictable neuronal pths and require less and less focused attention, and many of them turn almost into automatic reflexes. Walking, biking, playing an instrument, an assembly line worker, the writing of one’s signature, eventually require little conscious directing. A sensory memory uses a series of motor reflexes in order to translate itself into a movement. It is an all or nothing reflex, a collective response that once it is started has a powerful tendency to run through completion. It is hard to pause midway a movement, and movements such as swallowing, sneezing etc are impossible,

So, the body does what feels right. When you try to change a pattern, you need not only to unlearn the old pattern, and learn the new, but you need also fight the sensation that you are doing something that feels wrong.

You begin by remembering how it felt to do it.

Wow, thank you so much for writing this up @sofie.malm-3492 !!!
Super fascinating. I need to pay attention to those motor patterns!
Now I need to think about how what I learned from you translates back. I’m thinking workflows.

Big theme for me - and I find too challenging to write down in the time available, happy to jump onto a call and discuss. Some key themes I’d add in:

The difference between a living being and a living system: consciousness, the capacity for meaning making. I see the human and the org as living beings. This is what collective intelligence etc. means …

Love the overall trigger, it’s one of my favourites!

And yes, I agree on all points.

As I said, it’s not so much on whether this is a perfect comparison - I wouldn’t want to compare two systems that are that complex each - but more about whether this works as an analogy, like a teaching aid.

I’ll need to think on the unknowable elements, and yes, very much also about the interactions.