I think sociocracy needs both traits traditionally seen as feminine and those seen as masculine. We need to see the whole but also the parts. We need to slow down and listen and keep the collective in mind but we also need some assertiveness and single-focusedness.
The mix within SoFA is working for me. Since I think I am personality-wise more on the pragmatic/cut-and-dry side but was raised (hard) to be more collectively minded, I hope I’m somewhat in the middle maybe…? Maybe not. You tell me!

So I’ve also come to understand some sociocratic patterns as a synthesis of traditionally “femenine” and “masculine” energies. One, as you mention, forward motion or linearity, the effectiveness principle. The other, the togetherness of the circle, the ethos of care, the principle of equivalence. The facilitator throws a prompt (forward motion), but moves it forward through rounds (circular motion). Somebody drafts a proposal (forward motion) but brings it to the circle for feedback (circular motion). You’ve described it beautifully as breathing cycles. Tho I often wonder if putting it in terms of femeninity and masculinity is just more of the same “boxing” that’s been so painful for us. I find ease in thinking that more than boxes, they’re really energies, and they’re both alive in each of us as groups and individuals at different times. It’s never entirely one or the other, and it’s up to every group and individual to find that balance of their inner dualities. Then again, why insist on associating things like “care” with femeninity (or masculinity, for that matter) when we can just make it worthy enough on its own, and practice “care” for the sake of “care”?

Yes. Balance of everything is what’s needed.

Lol, isn’t that always the answer?

Every good meeting always ends with someone saying “it’s all about finding that balance” and everyone nodding.

In order to talk about this, I would have to ask:
What is masculinity and feminity? And why is it that thing (for you)? Is it the same for others? How and how not?

Gendered associations with masculinity and femininity are somewhat arbitrary and culturally defined more than inherent, thought that whole conversation is quite a doozy, especially when getting into the nuances of the difference between “gender” with “sex”. This little article from South Dakota University presents the straight difference and acknowledges social gender roles, which do differ in different societies.

I appreciate that the Chinese/Daoist conception of yin and yang doesn’t necessarily gender these concepts which are often gendered.

It seems like the whole conflation of bodily sex with gender identity and presentation is problematic for a lot of folks (probably to a degree many may not realize).

I’m curious @eric.tolson have you seen any good articles in spanish which cover some of these differences or translations of things like this Genderbread Person? 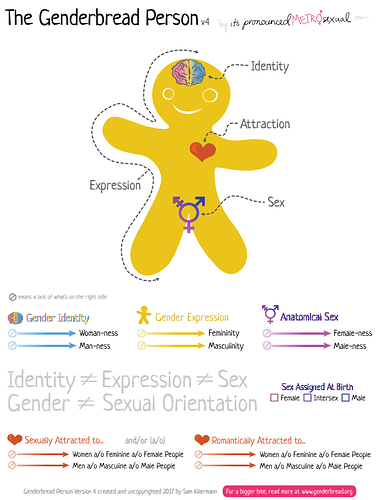 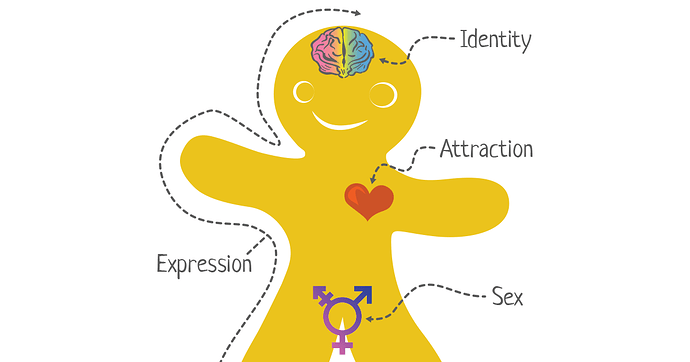 An Adorable, Accessible Way to Explain a Complicated Concept » The...

Breaking a complicated concept into bite-sized, digestible pieces. So, you want to better understand gender, or need help explaining it to someone else? Used by — and contributed to by — countless people around the world and throughout the decades,...

I would find it easier to have a conversation about qualities which aren’t pinned to gender. It would make it easier for me to understand exactly what is being talked about, and also… It seems like the conflation of gender and Sex, among other things (like orientation) is often a point of complication. It seems to me, that very pretty common conflation causes a lot of frustration.

Otherwise, I guess we’d have to pick some cultural context first and define what we’re calling masculine and feminine, and then I could speak more to how these more clearly defined qualities show up.